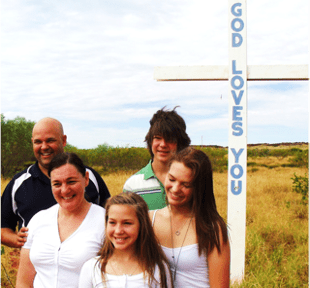 Richard and Tracy Goscombe, and their three children, Rachel, Josh and Sarah, moved from Cranebrook in Western Sydney to the sunny West Australian mining town of Wickham in 2009. Richard is Wickham’s first Anglican Rector in a decade. So far there is no church building to meet in, but the Goscombes have already had opportunities to make relationships in the community. “I am actually grateful for the opportunity that not having a building provides to break some religious stereotypes,” says Richard. “Rather than people in the town thinking we are just here to bring religious rituals, I am hoping to establish a chaplaincy style ministry to the whole town that shows God is relevant to every part of their lives.”

Most people move to North West Australia for the big dollars on offer. Wickham is a small town near Karratha, more than 1,600 km north of Perth. Mining is the main industry among the 1,800 residents. There is a high level of disposable income, but in spite of the prosperity, such wealth has given rise to many problems; notably binge drinking among young people with too much money and time on their hands. There are a number of divisive issues in the town, but much unity is found on the sporting field. Both AFL and NRL are popular pastimes.

The Lord has placed us among a number of different groups we need you to pray for:

·  FiFo – ‘Fly-in Fly-out’ workers that simply come here for their job. They are in & out as quick as they can & therefore contribute little to the life of the community.

·  Company families – here for an average of 6 years. Attempting to set themselves up financially in a short period of time. Those who start a family become more involved in the Town, & some become…

·  Long-term residents – still planning to leave, but haven’t got around to it yet.

·  Locals – those who have made their home here (some have grown up here). Won’t move until they retire (if at all).

·  Among the ‘locals’ here are also of course non-company employed residents, & the aboriginal & TSI communities.

·  The high number of travellers that come through each year between May-Sep (largely retirees).

Pray we would grow to understand the nature & needs of each of these groups, and how they can be reached with the Gospel.

The Lord has kindly placed us among 3,500 people. Please pray for them: in the mining town of Wickham; the seaside hamlets of Point Samson & Cossack; the men’s & women’s prison (many of whom are local to the area);  the indigenous village of Roebourne, together with the  aboriginal communities of Five Mile & Cheeditha. Most are lost, desperately needing a Saviour. Please pray that God will prepare the hearts of all these to receive his Word of salvation with faith.

Lorem Ipsum is simply dummy text of the printing and typesetting industry. Lorem Ipsum has been the industry's standard dummy text ever since the 1500s